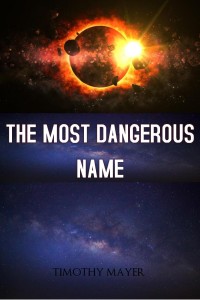 The Most Dangerous Name cover

The imperial picket ship folded space to take them right outside the orbit of Terra, the imperial capitol. On board were Shakti and her friends from Harmony by way of Trazalk. With them in the forward passenger hold was Prefect Tan, the man who’d “discovered” them after they’d finished competing in the games. The women might not have won the tournament, but they did well enough to impress him. A group of fighting women filled his order and he did what he needed to do to get them back to Terra.

They stood on the field that day while a light rain began, unable to believe what he told them. The prefect wanted them to accompany him to Terra to become brides of the emperor. They’d be granted full pardons on the spot and allowed to leave as free citizens of the empire with all rights restored. Even Mangi couldn’t believe their good fortune.

There was just one small catch: they would be drafted into the imperial forces when the wedding was complete. It was a twenty-five year term of service until they would be allowed to return to their new husband on Terra. In the meantime, they would deploy whenever needed by the emperor and his military. However, as Warbrides, they would have the best food, training and medical attention any of them could imagine. Plus, the prefect wanted them as a complete set, if any one decided against the offer; none of them was allowed to leave.

They asked the prefect a minute to decided and gathered off to one corner of the field to discuss the offer. Most were immediately in favor of the offer, since it got them off the prison plant. Chimata and Mangi were the only two with misgivings. “What?” Chimata said to the other women. “Are we trading one prison for another? We’ll still be in chains, just longer ones.”

“I don’t see what we’ll gain from becoming ‘warbrides’,” said Mangi. “We’ll be wives of the emperor. Don’t you realize what that means? We can be executed for looking at another man the wrong way.”

“I don’t think any of the emperor’s wives have been executed in the past hundred years,” Shakti pointed out. “He has several hundred wives on Terra the last time I checked, so I don’t think he’ll track every single one.”

The women argued over and over until they finally talked the holdouts into accepting the prefect’s offer. They pointed out there was little chance to leave the prison planet unless they won the tournament the next time around. If they stayed on Trazalk, quite possibly, they would all be sent to different divisions and some of those might be pleasure houses. It was the threat of working in a pleasure house that brought the holdouts around. Mangi stood still at in the gathering and said, “Well, if we become warbrides it means we never have another man on top of us other than the emperor, doesn’t it?”

“Yes,” Shakti agreed. “He’s not a young man anymore, so no more leaning over a rail. Plus, you don’t have to do it because you need to pay the rent.”

The prefect looked up and saw one of the women walking up to him. This was the very dark lady called Shakti, he remembered. The prefect had a wife back on Terra and four children for whom he provided. Still, his heart was stirred by the site of this woman in plain tunic walking barefoot across the field to him. Her arms showed a muscled profile and he found it attractive, but slammed the door on his thoughts. He was a young court official who won his position by connections and high marks on the imperial exams when he graduated the civil service academy. His loyalty was to his emperor, relatives and immediate family, he reminded himself as he ran his hand through his fine black hair. Besides, these women were all convicted criminals and he needed to remind himself of this fact.

“So have you reached a decision?” he asked her. She stood in front of him and folded her arms. The heat of her body radiated into the air.

“Get packed,” he told her. “I don’t think you’ve lived here long enough to accumulate any attachments. We leave tomorrow.”

The Most Dangerous Name