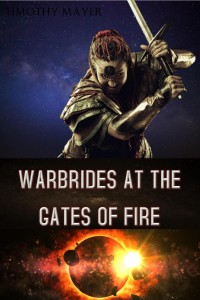 “I want you to stay out of the way, understand?”

Shakti was in the infirmary with Seth, the colonist they’d rescued from the pirate ship. His strength was improving, but she was still concerned about his health. He was on her mind because the last thing she needed right now was a young man loose among her co-wives when they were in combat status. She’d already lost two of the other warbrides and their effectiveness depended on fighting together as a team. Lose too many members and they wouldn’t have the numbers to field a fighting force against the wasps.

A male in their midst was a potential problem. A man could cause a division to form among the other co-wives and create feelings of jealousy and anger when they needed to be coherent. They were supposed to be married to the emperor, but the reality of their status involved eight young women in close quarters with a young man in their midst. Their menstrual cycles were running in conjunction from the confinement they shared and that caused enough trouble. But ovulation was nothing compared to the damage two or more women fighting over one man would create if she let it get out of control.

“Can’t you just send me to another ship?” Seth asked her. He was wrapped in a robe and able to move about the infirmary, but not much else. He wasn’t acting sexually aggressive, but Shakti knew from her years of work as a pleasure girl that the testosterone could trigger him any minute. She could feel the pheromones in the air and these weren’t the kind created by the wasps.

“No. You were too ill to transfer before we folded space. The autodoc told us you had an eighty percent fatality chance if you were moved. I don’t like those odds and we won’t be responsible for the death of an innocent man.”

She was wearing her standard warbride uniform, which was bothersome enough. Most of the women found the grey tunics uncomfortable and just wore enough for modesty when they were alone in the corvette. It wasn’t unusual to float into the command center, where there was no gravity, and see three topless women wearing wraps around their waists while they ran diagnostics on the Widowmaker. Bravi would wear nothing if Shakti hadn’t informed her it was unsanitary to be in the command center with her ass uncovered. For most of the women, a breast wrap was essential in zero-g since the women with larger ones had them in the way.

‘I don’t want to be a bother to you,” Seth told her and lay back on the infirmary bed. His vital signs were posted on a screen over him.

“I’m letting you know,” Shakti told him. “We may be in for some rough weather because the war college wanted us to jump into this particular sector for right away. I don’t know why, they seemed to feel there might be an intrusion from the wasps here. It’s far away from any settlements, so I don’t know what they’re thinking.”

Her wristband buzzed and Shakti raised it to her ear. She could tell by the call sign that it was Lashmi. “What?” she said to it. “I’m down here with the colonist. What is so important you have to call me right now?”

“Durga said you might want to get up here pretty quick,” she told her. “Something has come up and we need you to see it.”

“Give me five minutes,” she told her. Shakti turned to Seth and smiled. “Just be a good boy and stay out of the way. And let me know if any of the women decided to spend too much time down here with you.”

She emerged into the command center and floated down by way of the handholds mounted into the walls of it. The first thing she noted was the casual atmosphere of the women. Bravi had lifted the thin shirt she wore and let Kamala see her nipple piercings. Curious, Kamala reached out and touched one of them.

“Don’t those hurt?” the big woman asked her.

“Only when you tug on them too much,” Bravi told her. “They got me plenty of tips the last place I worked, but I had to let the men know when to quit. So, are you going to show me how to swing that big ax of yours in zero-g?”

“Only when the Boss…” Kamala started to say, and then stopped when she saw Shakti. “Oh, there she is.”

Shakti glared at them as she floated by in the direction of Lashmi. The tried to look busy and she ignored them. Lashmi was next to Durga floating over a set of communication panels.

“Seth okay?” Lashmi asked her as Shakti moved over to them.

“He’ll be fine so long as he stays put,” she informed her. Shakti turned to Durga. “Why did you need to see me right away?”

The tall woman turned her ice blue eyes on Shakti. “We just received a message from the war college. You need to see this.” She pointed to the screen in front of her.

Shakti looked down at the screen and began to read. In the distance, she could see Tara talking with Chimata. Both of them were wearing a pair of shorts and nothing else. She needed to talk to them about their choice of clothing or lack thereof. With Seth around it would become a problem. Chimata was telling her co-wife how she ended up on Harmony from Skullstone. Dharma was by herself and quiet for some reason.

“Urgent message to the Corvette Widowmaker,” the message from the war college began. “We have detected three enemy ships in the sector you were sent to investigate. They do not appear to be traveling at relativistic speeds, so you will have no trouble with them when they come into range of your instruments. You are ordered to intercept but do not engage the enemy unless fired upon. We have prepared a contingent of dreadnoughts to destroy them once you have determined their velocity and location. The crown prince is in command of the dreadnoughts and wishes to eliminate the wasp ships for the honor of his father.”

“I thought you’d find it a little disgusting,” Durga told her. “They want us to let the wasps through so the prince takes the credit for destroying them.”

“This is ridiculous,” Shakti pointed out. “If those ships don’t have the ability to fold space, we can handle the situation ourselves. It’s a waste of time and firepower to let them through.”

Durga placed one hand on Shakti’s back and put her lips to her commander’s left ear. “It did say not to engage unless they fired on us. All you have to do is get in range and they’ll have no other choice.”

“It would be one way to get around the order,” Shakti told her while she pushed Durga away. Like many of the warbrides, she didn’t like to be touched.

Shakti turned and noticed Dharma was back to working on the diagnostic she was supposed to accomplish by the end of the day. She tended to fade in and out mentally and this worried the other warbrides.

“You didn’t work very long in a pleasure house, did you?” Bravi asked Kamala after she dropped her shirt. “You don’t have the same attitude the rest of us have.”

“It was all I could find when my family was rounded up,” she told the other woman. “They were all smugglers and I was the only one the judge set free. I don’t know where the rest of them ended. After four days of starving on the streets, a lady in fine clothes asked me if I wanted to learn how to make some real money. I told her yes. Guess I did the job too well.”

Shakti turned around and saw Lashmi wasn’t there. She glanced up and down the command center, which was built so every part of it was visible to anyone on the inside. Not much privacy, but the reason was clear when the ship was under fire and everyone needed to be accounted for in short time. Shakti liked Druga’s suggestion about provoking the wasp ships and needed to get everyone else’s input. Right now, Lashmi was the only one not in the command center.

“Anyone see Lashmi?” she called out to her co-wives.

“Check the infirmary,” Tara called out. “She keeps talking about the colonist.”

Shakti flipped the screen to show the inside of the infirmary. Low and behold, Lashmi was there already, next to Seth. This wouldn’t do. Shakti buzzed Lashmi on her wrist unit. She watched Lashmi turn her tattooed face up to the camera.

“I need you right now,” she snapped. “And don’t be so quick to leave the next time.”

She watched Lashmi hold her wrist unit up to the camera and shake it. Oh, this was absurd. She expected her to believe it was malfunctioning? Shakti swore and turned to the other women.

‘Listen up, Girls,” she said to them, “I just received a message from the war college. We have three wasp ships headed our way and they want us to ignore them unless we are fired upon. The war college wants the crown prince to take credit for their destruction. I think we should save our husband’s favorite son the trouble and engage them ourselves. But I want to know what you think before I make the decision.”

“Any idea what we’re up against?” Chimata asked her. “We haven’t run into too many of them yet. The last one was unarmed by the time we got there. I’d like to know what we’re expected to fight before I vote.”

“I don’t know,” Shakti explained. “The best information I have tells me the three ships are traveling at sub-relativistic speeds. Which means they’re not pushing too hard. We don’t think the wasps know how to fold space yet, so we have that advantage over them.”

“I’ll tell the war council we received their message,” Durga informed them as she made some adjustments on a panel. “I just won’t tell them what we’re doing.”

Dharma was still in an unresponsive state. Shakti looked over at her and saw the small woman fidgeting a lot as she floated over her station. She didn’t like the way Dharma appeared. Shakti knew most of the women carried baggage from their former professions. The toll it took on them was great. She herself had issues with closeness to any of her co-wives. It was only the responsibility she felt for them, which motivated her. If it wasn’t for the threat the wasps represented to humanity, she’d suggest they take the corvette and fold space beyond the reach of the empire.

“Should we even care about the war college?” Kamala brought up. “We’re out here on our own. They sent us here because there might be some wasp activity and now we’re supposed to avoid them? The hell with that.”

“She’s right,” Tara added. “What is the point of us being sent here to take out the wasps if we’re supposed to let the prince get the credit? What are they going to do? Let him push the button on a nuclear torpedo after it’s been sighted?”

Shakti clicked the screen back to the infirmary and found it empty. What the hell was going on down there? Now both Lashmi and Seth were gone. This was not a time to be searching over the ship when she had to make an important decision. Shakti decided she would have a conversation with Lashmi when this alert was over.

Gates Of Fire at Amazon.com