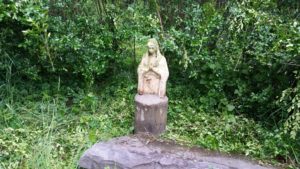 Love on a Plate

(This was done for the 10/27/16 local writers’ group story jam and was inspired by Chelsea Quinn Yarbo’s Disturb Not My Slumbering Fair, which has the greatest opening line in history)

It was Tuesday when Josh hired the ghoul to work in his restaurant.

With the season winding down and Lilly home with Peter, Josh needed all the help he could get. It was always hard to find good help for a restaurant. The tourist season was the only time of the year they made any money in Amarillo Falls. Josh needed to make sure there were people to serve the clients every night he was open.

Josh was at his desk right after the lunch rush. One of his servers came and told him there was a young woman who wanted a job as a cook. Thrilled, but not hopeful, Josh had her sent to his office.

“Hello,” the young woman said to him. “I’m Dee; I understand you need some help? I’ve been a cook for the past five years and I have references.”

She appeared to be in her late teens and had long black hair that matched her translucent white skin. She wore a white gown. Dee focused her grey eyes on Josh and handed him her resume. Josh briefly touched her hand. It was ice cold.

“You’re a ghoul,” Josh said to her. He then turned to her resume, which had outstanding recommendations from people he knew.

“Is that going to be a problem?” she wanted to know. “I don’t need a lot of money and my cooking is good. You can call any of these people.”

Ghouls lived further up the Rio Temporis. They didn’t mix much with the humans and most people avoided them. Although they performed a valuable function in the valley’s ecosystem, it wasn’t the sort of thing people liked to think about when they ate dinner. There were rumors they fed on more than carrion.

“No we don’t,” she told him. “I have no idea where that rumor started. In case you wanted to ask, we avoid the sunlight because it hurts our eyes. I can work the evening shift if you need me.”

“Can you start tomorrow at six?” Josh asked her. He didn’t worry; she wouldn’t lie about those references.

“Good. Come by then and I’ll have the kitchen manager show you around.” His restaurant expanded a lot after he and Lilly were married.

“I hired a ghoul in the kitchen,” he told Lilly when he came home from work. His wife, half his age, was playing with little Peter in their place that overlooked the valley.

“Glad you got some help,” she told him. “Can this one really cook? I thought their food had to be dead.” Lilly was an artist who sold her paintings down near the tourist spots at the bottom of the valley.

“According to everyone I called,” Josh told her, “ she can. I even talked to Meltor over at the Atlantean place. He said she was one of the best he ever had, but let her go when business died down.”

The statue in the hall began to cry. Josh sighed and went over to answer it. This had to be a call from his food supplier.

Dee was punctual, did her work on time, but didn’t mix with the other employees. She would sit in a dark area of the break room by herself. Something to do with ghouls and their relationship with death made people nervous around her.

This all changed when one of the servers, Ben, took an interest in her. Ben was a lovesick young man of twenty who made sure his break was always coordinated with hers. Soon, Ben could be seen with Dee in on break every day around eight in the evening.

“You and the new girl are becoming an item?” Josh said to Ben one afternoon when he saw him walking up the stone stairs for his shift.

“Girl of my dreams,” he told him. “We’ve started going out.”

I don’t know if that’s such a good thing, Josh thought as Ben continued to walk up to the restaurant.

A week later, Josh received a call from the fire warden. “You’re closed on Mondays, aren’t you Josh?” the statue phone said to him. This was a new one made to look like his wife in a gown.

“Lot of smoke coming out of your chimney,” the chief told him over the statue. “You might want to get over there and check it out. Also, someone saw your new cook and a server hanging out over there.”

“I check right into it,” Josh promised him.

Lilly was a little concerned when she saw Josh winding up the spring on his pistol. “Where are you going with that?” she demanded. Lilly held Peter in her arms and needed to nurse him.

“Someone saw Dee with Ben at the restaurant and we’re closed. If she’s hurt that boy, I’ll have her stone coffin ordered tomorrow!” He turned and stormed out.

Josh walked into the restaurant and smelled roasting meat. He walked up to the kitchen entrance and was horrified to see Josh’s clothes piled next to the doors. Josh cocked his pistol and made sure it was loaded with a full round of darts.

Later that evening, Lilly was surprise to see Josh return home with a calm look on his face. He took out his pistol, unwound the tension in the spring, and put it far away above the reach of any small hands.

“Everything okay at the restaurant?” she asked him.

“Yes it is,” he told her. “Dee wanted to get started on the menu tomorrow and Ben invited himself over to help her. One thing leads to another and I well, uh, walked in on them in the kitchen. You know, like the time down in your booth when we didn’t think anyone was around that late at night.”

“Oh,” she smiled. “Bet you were embarrassed.”

“Yes. I told them there is a time and a place, but not in my kitchen. Turns out they’re engaged and want me to cater the reception.”

“See,” Lilly told him as she rose up on her toes to kiss Josh. “And you were all concerned people would talk because our differences when we got married.” Lilly was in her early twenties and Josh his late forties when they said their vows in front of the flame trees.

“Not the same thing,” he told her as they headed to the nursery on their way to the bedroom. “Ben’s 20. Dee listed her age as 673 on the employment forms. Nobody really knows how long ghouls live.”