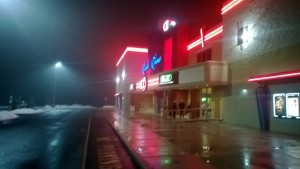 “What?” Kate asked. “Let me guess, wife is off to a Lion’s Club meeting and you’re free to prowl.”

He grumbled and moved on.

“Five seconds more and he’d be trying to tell us how he was a film producer looking for the right actress for a new movie. I’ve ran into the type before. He’s not getting anywhere near my pants.”

Kate had a way to cut right through to the heart of the problem. She was applying to law schools and I thought it would serve her well.

The club was glitzy, but not out of control. The day of the exclusive Manhattan night club will never be over, just change locations. The drinks were over-priced and watered down, which I expected. In the corner booths men in sharp suits were paying for bottle service with women half their age. It was a big fish pond in there and men were casting their lines all over the place.

Suddenly I saw Kate look off in the distance and nearly drop her drink.

“What’s up?” I replied to her. “You look like you just saw the genii from Aladdin’s lamp.”

“No genii,” she returned, “but he can grant me three wishes.”

Kate’s entire composure changed. She went from innocent little college girl to cat on the prowl in under thirty seconds. She knocked back the drink, unbuttoned the top button on her shirt to let her cleavage show and began walking away from me. She had the look in her eyes of someone who had just opened a cigar box and found a diamond.

She pointed at the man sitting in a circle of admirers at the corner of the bar. He was in his early thirties and holding a drink. He wore a Brooks Brothers suit and had tight buzz haircut which set-off his tattooed neck. The man was holding court, it was the only way I could describe what was going on before us.

“Jacque Cinder, the film producer. I’ve been trying to get an interview with him for the past four months.”

I didn’t run in the same film studies circles Kate did. I knew she was always going to some revival showing and bitching about how no one wanted to look at her latest cinematic masterpiece shot on a cell phone camera. I’d looked at a few of her films on the Internet and couldn’t figure out what the point was for any of them. According to her, they were all “post-modernist” whatever that meant. All I knew about the film industry was what our finance professors thought about it: a mountain of hot air built on clouds from fairyland. It was supposed to be the classic example of how people lost a lot of money chasing status and not profits.

“Oh,” I said. “That makes all the difference. Then go chase him down.”

She strutted off with her hips swaying. Guess I would be getting my own cab tonight. I was betting all she would get out talking with him was a hangover. Or a hickey on her neck she would tell everyone was put there by the famous film producer.

I took a big sip of my drink and then everything went grey.

“And you don’t remember a thing after that?” John Rico asked me.

“Not a bit,” I said and I wasn’t lying. One minute I’m watching Kate go in for the kill, the next I’m dressed as an extra for a Vegas show.

“I will try to fill you in so you know how you arrived here,” he began.

“I saw you wobble at the bar right after your friend left. I knew something wasn’t right and point to you so Edward could see me. He was standing four feet away, trying to keep someone away. My business was over and I wanted to get out of there. Understanding what I meant he walked over to you and brought you back to my booth.”

“Something wasn’t right. You kept saying over and over again how you had messed up your outfit. I looked at the clothes you were wearing and you’d spilled your drink all over them. And that look on your face, it reminded me of a hurt little girl. I had to do something. Edward asked for your ID and you couldn’t find it. Then you started crying and people were turning to look at us. I asked you why the tears and you told us your parents were coming next week and would be very disappointed if your best set of clothes were messed up. So I decided the decent thing to do was take you someplace to get some better clothes. Edward thought this was a good idea too.”

“He had the car brought around and made a pathway for us both to get out of the club and into the car. By the time we were in the car you had managed to find your ID and showed it to us. I hadn’t realized what had happened, I thought you were just feeling a little bit sick. But, according to our good doctor who ran some tests this morning, someone slipped a nasty drug into your drink. I don’t know who did it, but the club and police were informed. They have assured me they’re looking at the security feeds today.”

“We took off from the club and I asked you did you have a place you would like to go to get some new clothes. You didn’t seem to understand what I was saying and gave me and address. I thought this might be where you lived because it sounded like an apartment building. Edward called it up on the GPS and away we went. The GPS didn’t seem to know where we were going and it was down in the village anyway, so I figured it couldn’t be too bad. I must say we were a little bit surprised when we arrived.”

I asked him what address I had given him and he repeated it to me.

About four months ago I had applied at a job for a high-end lingerie and romance emporium which had recently opened in the village. It was called “A Thousand and One Delights” and I had given him the address of the place. Why it had popped out of my mind when I was floating in the vapor is still something I don’t understand.

“We pulled up in front of the address and realized it wasn’t a residence. While I was asking you if there was someplace else you wanted to go, you knocked the door open and bounced out into the store. I had Edward park the car and went in after you. I was trying to get my cell phone out and call someone when I saw you stripping off your clothes in the middle of the store.”

“You were taking your clothes off in the middle of the store. However, the sales lady who was on duty that evening didn’t see you; she had her attention focused on some lady who had a man on a leash at the counter. You were out of her visual range, but I could see you from the street. I ran in and tried to do something.”