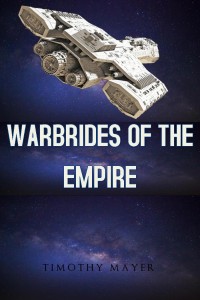 This is Chapter One of my latest work on Amazon. It is free until 2/12/16. The other parts will be published every two weeks until the series concludes with part 10. You can find it by going on Amazon here:

Shakti was five standard days in Harmony when the watch busted her for shaking down a customer and selling her body without a license.

It was hard to get a license to do business in Harmony as the planetary governor made plenty of money on the side selling them to the girls who needed work. He pocketed the difference between what the legal code allowed him to charge and what the girls or their pimp paid him. It was usually double what the regulations showed as the standard fee. Plenty of the pleasure workers found the spare coin to do it since the governor approved only so many permits every year. To be caught in the capitol city of Nuvar without a permit while selling your favors was a serious crime.

Shakti didn’t care for their permits or permission when she found herself on the planet. Harmony was another military planet where Shakti could earn some fast money and move onto the next world. Recruits in the emperor’s armed forces were sent there as part of their basic training. The planet had plenty of different terrains to support the many fighting scenarios the soldiers encountered over the thousand worlds of the empire. Some place was always in revolt or trying to cause trouble to another star system. The emperor always had need of new bodies in uniform to hurl at pirates or planets.

Harmony was close to the capitol world of the empire; only ten standard light years away. When the dominion of humanity spread across the stars, it was one of the first colonized by humans. The local flora and fauna still survived, although many of them thrived only in zoos or botanical gardens. It was a tragedy, but the empire needed somewhere to train the legions and Harmony was ideal.

The shuttle dropped Shakti off three standard days ago. She was a busy girl who earned her first handful of silver from a lonely merchant.  He supplied provisions to the local officer’s quarters. Female companionship was hard to find on Harmony for him, since all of his wives were off world. It was a brutal and harsh training environment in the port city where she disembarked. Shakti stood alone the day she paid the smuggler on the shuttle and walked to the nearest bar from the landing field. She carried with her a bag of clothes and personal possessions; all she owned in the universe.

The merchant was the first man she met on the planet. He was leaving the bar when the green-eyed, dark woman with the travel bag walked up the street. She was alone and the middle-aged merchant saw an opportunity. If the woman was alone, she was new. He wouldn’t have to pay an absurd amount of money for her companionship this evening. It was a lucky day for Mr. Lin Dai. This new arrival appeared no more than twenty-five years of age, which was his ideal.

Shakti saw him right away. He had fine clothes and the need in his face. No uniform, which meant he was not part of the military. This man had to be a contractor to the emperor’s legions who needed some love. It was a thing she could provide for the right price. Love was expensive and she knew the going rate.

“Good evening, Citizen,” He addressed her as the slender woman stopped in front of him. “Would you need an escort to your home tonight? The streets of this town are dangerous in the evening. Let me give you some assistance.”

“Why, thank you, kind Sir,” Shakti told him. “I am new to these parts and appreciate your generous offer.” She looked at his eyes closely to make sure. “Would you need some companionship for the evening?”

“I am a lonely man,” he told her. “I don’t have a lot of money, but I can let you stay at my hotel tonight and take care of you for the next few days until my ship leaves.”

Shakti offered him her arm and he took it as they walked down the street toward a waiting car and his hotel. Her clothes were not the best, so he bought her some better ones that evening. He was the envy of many men at the restaurant that evening and made certain they all saw him with the young woman by his side when he left. After dinner and some entertainment in the city, they returned to his room.

Shakti spent two standard days learning about her latest port of call. She needed to know how things worked on the streets. She made Mr. Dai’s lonely nights warm and listened to him when he told her about his supply and transport problems to and from the planet. Shakti made him feel young again and he would remember always the soft dark face next to him every day with the small scar across her nose. She curled next to him every morning. Shakti stayed with him and didn’t leave the bed until he was awake.

For this reason, it pained him to report her to the city watch when she left early with all his spare cash. He should have known better, but Shakti was a professional in her filed just as he was in his. And, with great skill, Shakti lifted all the money from Mr. Dai when she exited that final morning with a three-hour head start. The watch commander told Mr. Dai they would do their best to find the woman who robbed him.

In another part of the city, a woman of nineteen years found herself inside a jail cell when she walked off with an officer’s class ring. Durga was an expert at separating men from their personal items when they didn’t notice. She found it easy enough after a night of hot passion with a soldier, but today she’d been lucky. The colonel was carless and removed the ring to wash his hands at a public washbasin. She spotted it from the door and snatched the ring when he turned his back. Durga, a tall and hefty pale girl was on her way to sell the ring when a squadron of soldiers jumped her. She hadn’t noticed them in the background…