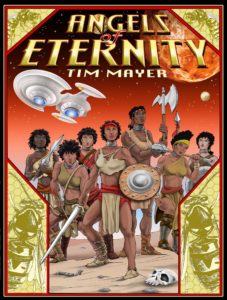 Chimata scampered over to Durga. She did like Kamala. Even if they weren’t part of the same family, she would spend time with her. It was nice to have someone she felt close to inside this metal box.

“Tara,” Shakti asked the woman who was outside working on the hull of the corvette. “How does it look for the transmitter?”

“I have it operational,” she transmitted. “See if you can raise Durga. The plasma blast from the torpedo explosion didn’t do as much damage as I thought. It should be okay to use. You might want to retract it after you’re sure it works. The final wasp destroyer could hit us again and I don’t know if I can fix this a second time.”

“Thanks,” Shakti told her. “I’m going to try and raise Durga. Stand by.” Shakti switched channels on her suit armor’s transmitter.

“Durga,” she sent. “Shakti here. Do you read me? Tara thinks she has the ship transmitter fixed.”

“You’re coming in fine,” her second’s voice came through the audio. “We’re showing an increase in energy on that wasp ship near their lasers. They might be ready to try another sting, probably at the torpedoes you sent, but they might try and carve you up too.”

Shakti turned and looked at her display panel. Everything was normal, but suddenly the signal she received from the second torpedo they fired went blank. The screen showed one star moving in the direction of the wasp destroyer, not two. She realized what had taken place.

“Tara!” she transmitted. “Get back inside now. I’m retracting the transmitter. The wasp ship just fired its lasers and took out one of the torpedoes. We might be next on their target!”

“Got it!” she said and began to pull herself in on the cord, which she attached her suit armor to on the way out of the port. The access port was only fifty yards away and she needed to get back to it.

Tara looked up and watched a sensor array dissolve to her right. Her blood went cold.

Inside the corvette, on the display panel in front of Shakti, a series of lights turned red. Shakti’s gloved hands began to shake. They’d been lasered and Tara was still outside!

“Three sensors just went dead,” Bravi transmitted from her station. “Oh, God! Tara’s out there! Tara, get your ass inside now!”

“How many minutes until detonation?” Shakti asked Lashmi. She could see the concern in her co-wife’s face through her faceplate.

“Detonate it now!” Shakti ordered. “Bravi, take the laser controls and hit that wasp ship with all we have until the second the torpedo explodes!”

Bravi grabbed the control panel for the lasers and turned her head to watch the magnification of the final torpedo headed toward the wasp destroyer. They just might be able to save Tara if it worked.

Tara, still outside, pulled hard on the line and was ten yards away from the port. All she had to do was get to it and open the door. It was easy. There wasn’t any air on the other side of the lock, so no reason to run a cycle through it. She saw something illuminate to her left and an entire section of the corvette surface began to glow. The laser had scored a direct hit again, but not on any vital spot. She could still get to the port. Just a few more seconds.

Angels of Eternity can be purchased from Amazon.