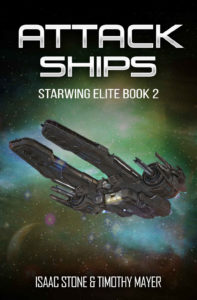 An excerpt from the second book in my latest trilogy:

As we moved back to our former location, I felt another presence near us. I blinked and tried to remember where I’d felt it before. It couldn’t be the Hard Rain, I knew everyone on its call sign. It was how I knew we’d lost Britani and Imani. This was something I’d felt before and needed to identify.

“Hey,” Orlando spoke, “check out the radar. We’ve got some new friends out here.”
I turned to have a look at my screens to find out what he talked about. Yes, there it was, coming in on our starboard side. The same patched-together mess I’d seen before.

The pirate ship Thunder Horse. This time it was ready for some serious action.
“What the hell is that?” Modero demanded to know as the pirate ship roared past us. It was headed directly at the mercenary starfighter configuration.

I could feel the rage inside the Thunder Horse as it plowed into the formation of the starfighters. This was something similar to what I’d felt inside Precious, although not on the same level. It was a rage born out of what they’d been through on a collective basis. Although no one of them had suffered as much, combined there was much hatred and fury inside all. This was different from what I’d felt from the mercenary pilots. These women wanted to do as much damage as possible to the mercs and they didn’t care what kind of collateral resulted. And we were that collateral.
The lasers opened up and began to fry every starfighter in range. There wasn’t even an offer of surrender. The Thunder Horse wanted to clean up the forward armies of the cartels, and then tear them themselves apart for whatever treasure they could find.
“I don’t think we need to do anything,” Tran observed as the pirate ship cooked the first starfighter with a barrage of laser fire. The outer skin of the starfighter peeled back in the vacuum of space and flew apart.
The next two starfighters didn’t last much longer. The pirate ship was ringed by twelve laser arrays. I knew because I had the AI track them. They weren’t easy to identify, and many were hidden in the assortment of junk armor fixed to the outer skin of the ship.
The starfighters attempted to flee and were sliced open when the combined power of six quantum lasers cut through their outer hulls. Most of the time, you couldn’t see them at work, as an individual laser only made its presence known after the target was destroyed. These pirate women wanted to hurt their targets before they killed them. I watched sections of the starfighters drift off into space while the lasers probed the ships and found their vulnerable points. Last to go was the pilot module. I don’t think they destroyed them most of the time, content to know the pilots wouldn’t live very long in a comprised pod.
“Cruel bunch,” Orland observed as we sat back and watched the slaughter. I was reminded of a weasel I once saw on a colony pounce and play with a local rodent before killing it.
“Captain wants to know why you broke formation and plugged that starfighter,” I heard Ely transmit over my audio. “She wants you to stay out of the fight until we see what that pirate ship intends on doing.”
“I have no intention of making her mad,” I transmitted back. “The starfighter I zapped was about to lead an attack and break through our formation, so I took some initiative. Doesn’t matter now as those pirates are putting a world of hurt on the mercs. Guess they should never have broken their contract with the UDF.”
The mercs had motherships of their own, although they used them more as bases of operation. They still needed to service the starfighters and haul back whatever loot they took. Right now, one of those base stations was trying to get out of the combat zone. The pirate ship scrapped three more starfighters as we watched. We all knew it would finish with the starfighters and then turn its attention on the real prize, that base station.

Most of the base stations didn’t have much in the way of armaments. The starfighters were supposed to provide any defense they needed. From what I knew, each base station traveled with ten starfighters minimum, upwards of eighteen if they were willing to sacrifice some mobility. The base stations were platforms that resembled large cylinders. The work done on the starfighters was performed outside the station, so there was no need for hangers or ready rooms.
We watched as the last starfighter was cooked by the guns of the Thunder Horse. I could feel the sadistic glee come from inside the pirate ship.
“Captain wants you back,” I heard Ely speak into the audio feed. “The marshal wants us deployed somewhere else in this godforsaken system.”
“What about that pirate ship?” I asked her. “When it’d done with the mercs it’ll be coming back for us.”
“Captain says not to worry about the pirates and the mercs, they can have each other for all she cares. We’re not worried about either one right now as there are some more problems with those drug runners in another part of this system. She says for all of you to get your asses back here for rest and refit so we can get to the next objective.”
I signed off and relayed the order to the rest of the crew.
“What, boss?” Modero responded. “They want us to bugger off? Hell, we can take both of those groups out in one punch.” I heard him swear in an older Earth language.
“Not our problem, men,” I relayed to them. “They’re letting the pirate ship have them, we’re heading back home.”
Orlando grumbled and turned the FAS around. I felt the mass inside it shift several times as he made the necessary adjustments to get us pointed back to the Hard Rain. From this distance, it appeared as a bright point of light, but I had the coordinates to bring us back to the hanger.