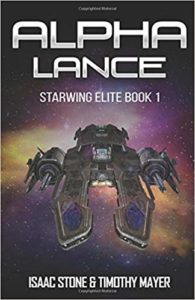 An excerpt from my latest novel:

I looked at another screen and saw the Hard Rain pick up speed. Captain was bringing her into firing range. There was no telling what else was on the other side of that orbital station and she wanted to be there in case we really hit some turbulence. The Hard Rain’s guns could blow the Ove station apart in seconds, but she wanted it taken intact. Based on her instructions, I felt the guns were to be used against the starfighters if they had the opportunity. It’s hard to nail a fast-moving object in space unless you’re another fast-moving object, even with cybernetics, which is why the pack is so badass.
“Helmets,” I told everyone. “Snap those tops in place.” My life screen told me the moment everyone had his helmet locked to the rest of their suits.

Orlando fired the plasma jets to full thrust and I felt myself pressing against the gyro’s cushion.

The Roka ship came at us about fifteen degrees off the front. I attacked at minus twelve. I had Tran fire the forward lasers as we moved into range. From what I could tell, these starfighters had only one pilot each, which didn’t allow for much visibility in the three hundred and sixty-degree battlespace of, well, space. Tran nailed the one coming at us right near the canopy. I watched the screen as it banked away without firing a single shot. The point of impact where the laser struck it turned yellow as the AI on board our FAS spooled out the damage done. It didn’t seem fatal and the starfighter was still in the game.

From what I could tell, the starfighter Tank engaged was piloted by someone with more experience. It tried to get in his backfield and do some serious damage. Tank was too smart for that old trick and had his pilot pull his FAS below the line of attack as the other starfighter roared in behind him for the quick kill. As the enemy ship attacked, Tank’s FAS dropped below his opponent range. Tank had his ship pop back up with the starfighter now in front of him. His gunner opened up with a quantum laser and scored a direct hit on the propulsion system. The other starfighter banked left as Tank’s FAS gave pursuit. Whoever was in that starfighter was good, after the breaching hit to propulsion they shunted the plasma ignition and were flying on inertia alone in order to avoid exploding.

As I’d expected, the starfighter we engaged was on its way back. He wasn’t about to let us have the advantage in pursuit. I looked down to see our laser bank charged and ready. I also noted the Hard Rain was in range too. The women who ran those guns needed target practice. Or at least that’s what my intuition was telling me, and I’ve lived long enough to have a ten-year-old child, so I was inclined to listen, even if it didn’t make the most tactical sense.

“Take us back towards the ship,” I told Orlando. “Let him think we’re in retreat.”

“Got it, boss,” Orlando let me know. “Don’t know why; that fighter’s acting funny. Probably the hit you scored on it.”

“Just lure him in,” I responded. The gunners on Hard Rain would have it figured out by now. They pick up things like that quick.
They waited until the starfighter was close enough for them to see the outline of it. As we retreated back, I saw the blue flashes from the surface of the Hard Rain that let me know it had fired two missiles right at the starfighter.

It tried to turn and flee, but too late. The missiles locked on their target and blew up the starfighter in a burst of color that instantly went to black. You have to admire that level of technology.

“Nice targeting,” I let Latasha know. “Who takes credit for that hit?”

There was a pause of three seconds as we hit some interference, and that’s a long time in mega-speed combat. I kept one eye on the screen that showed Tank about to pounce on the other starfighter.

“It was Adri,” Latasha informed me. “Good hit too. She managed to jam the countermeasures on the starfighter and guide that Deathdealer Missile right into the target. Why did you bring it in range instead of engaging yourself?”

“I had a feeling,” I let the mothership know. “Something was saying Corwin, give young Ardi a bit of the enemy’s hide,” I heard Latasha chuckle on the other end.

Adri was a sweet girl who’d grown up in another Order. Usually, the different Orders only matched their children to packs in the same Order, but sometimes it didn’t work out. The individual motherships needed a certain amount of bodies on board, or they would no longer be effective. Even with plans made years in advance, things might go wrong. When these cases came up, either they were forced to see what recruits were available or, better, what other Orders matched the one that needed mates.
Adri I remember from the day she came on board. There wasn’t any question about her fitting in; this was all decided by her original captain and ours’s. It turned out Adri’s ship, the Mycenae, was part of Amazon Order. Paired with the Apollo Order, they managed to make things work out over the years to everyone’s satisfaction. She was still nervous around so many men for the first time but told us later she’d looked forward to the experience.

Tank was her first assignment after she’d pledged into the pack. He later told me Adri was ecstatic when he shut the door behind them. She’d assumed her eventually family would be Amazon, but never really felt it was her destiny to be one. So, everyone took it as a win. We exchanged her for a young man who would benefit the Apollo Order’s gene pool, and everyone was happy. The Orders do their best to treat us like individuals with agency, as best they can, even if the needs of the gene pool trump everything in the end.