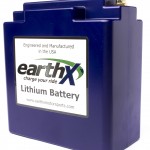 How do Lithium-ion batteries work?

Since their introduction as a watch battery in the late 1970’s, lithium-ion batteries have grown to become one of the most popular batteries in the consumer electronics market. Lithium batteries are used in every kind of device from computers to power drills. Their energy and recharging capacity make them ideal for portable electrical devices. It’s hard to imagine all the cell phones without lithium-ion batteries.

Although the concept of the lithium ion battery had been around for decades, lithium metal’s flammability made them difficult to use. Lithium metal is ideal for a battery material since it’s ions can rapidly move across an electrical gradient. But it also has a tendency to burst into fire when moisture is present. The metal reacts and releases hydrogen and oxygen, bursting into flame. This happens with many other of the metals in this part of the periodic table. I vividly remember a high school science teacher dropping a chunk of pure sodium into a beaker just to freak out the class when it went boom (don’t try this at home, kids!). The solution was to use lithium compounds which where the re-activity was much lower. But even today there are limits to how many lithium batteries can be carried on  an airplane.

Currently there are four major groups of lithium-ion batteries:(1), Lithium Nickel Manganese Cobalt Oxide, (2) Lithium Manganese Oxide, (3) Lithium Iron Phosphate and (4) lithium cobalt oxide. These are commonly known as (1) NMC, (2) LMO, (3) LFP and (4) LCO. There are also lithium-ion polymer batteries (“LiPo’s”) where the electrolyte is either a solid polymer or a gel structure (although the later are not “true” LiPo’s). Since NMC’s are excellent on specific energy, they are used for portable tools and power-trains. LMO’s are very stable, due to their internal 3-D structure, and are used to power medical devices. Since LPO’s have a high current rating and a long life cycle, they are used in situations needing a high load current and endurance. LCO’s have been in use since 1991 and power cell phones, laptops and tablets. Research is undergoing to find better and more effective lithium compounds for use as battery material.

Because of the flammability issue, Lithium ion batteries need to be in a sealed container, away from the harmful effects of moisture. There have been a number of exaggerated cases of lithium-ion batteries bursting into flame (or “rapid disassembly” in  the vernacular), but with the rise of lithium compounds, this isn’t much of a concern. Still, safety rules need to be followed.

To ensure a safe operation, lithium-ion batteries need a battery management system to prevent the battery from improperly charging or discharging. Known as “smart batteries” each lithium-ion battery should have circuitry which monitors its performance. Some smart batteries even communicate with the unit they are powering. Should the battery behave detrimentally to the external unit, it will be shut-down.

Lithium ion batteries power many of the portable electronic devices we use in our daily lives and will continue to do so for years to come. They are subject of ongoing research into increasing battery efficiency. Expect to see better and less expensive lithium-ion batteries in the future.

This was previously published in on How Do Batteries Work? 3/5/2015