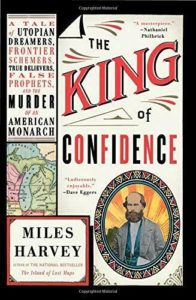 The King of Confidence (2020, Little Brown and Company)

One of the stranger successors to the leadership of the Mormon church was a man known as James Strang. He was a later convert at Nauvoo in central Illinois and managed to join the church just before Joseph Smith, the prophet and founder of the Church of Jesus Christ of Latter Day Saints, was gunned down by a mob in June of 1844. When the leaders of the church argued over who should succeed Joseph Smith, Strang appeared with letters supposedly sent from Smith before his death. The letters claimed Strang should lead the church if anything happened to the prophet. Most of the faithful rejected Strang’s claims and headed off with Brigham Young to the desert kingdom in Utah. However, a not insignificant number of the faithful traveled to an island off the coast of Michigan and attempted to set up the True Mormon Church.

The author of this biography, Miles Harvey, was commissioned to write this study of Strang and his ministry. It makes for an interesting read as the reader uncovers the story of the man who would be prophet as his story unfolds in the book. Harvey ties everything into a quest for fame in the antebellum American republic. Now anyone could be famous (and maybe even rich) by way of the media. P. T. Barnum was the template that many followed.

He also links the life of Strang with all manner of contemporary Utopian and revolutionary movements. There’s mention of John Brown, The Oneida settlement, New Harmony, and many others. Strang’s own community lasted six years and ended when his enemies decided to vote him out of office via lead.

Strang’s “garden of peace” began to take root in an age when America was teeming with utopian experiments. “We are a little wild here with numberless projects of social reform,” the essayist Ralph Waldo Emerson had joked to a Scottish friend in 1840. “Not a reading man but has a draft of a new Community in his waistcoat pocket.” Just 100 miles to the north of Voree, for example, was a colony called Ceresco—one of twenty-three loosely affiliated socialist communes scattered throughout the United States, all of them inspired by the French utopian philosopher Charles Fourier. “Our ulterior aim,” wrote a member of one such commune in 1844, “is nothing less than Heaven on Earth, the conversion of this globe, now exhaling pestilential vapors and possessed by unnatural climates, into the abode of beauty and health.”

Strang preached against polygamy but found it useful to re-institute it for his own reasons. He managed to get himself elected to the state legislature by way of his parishioners voting for him. By all accounts, he was as gifted speaker in an age when public speaking was a major past time for citizens. And he managed to have his followers crown him Emperor of the Known Universe.

…No doubt Hans Christian Andersen’s fable of deception and delusion had special resonance for antebellum readers, who increasingly encountered con artists in their everyday lives. Now, with the help of Adams, Strang was about to offer his own retelling of that parable, but with a twist: in his version, swindler and emperor were the same man. And somehow this man, this fabulist, this king, had managed to convince the 235 lonely souls gathered in the tabernacle that his paper crown was a dazzling royal diadem, that his wooden scepter hummed with occult energies, and that his floor-length red robe, stitched together by ladies of the church, enveloped him in righteousness and splendor. But did he believe it himself? Had he become so masterly at spinning cloth from thin air that now, perched on his moss-stuffed throne, he had finally become both the deceiver and the deceived?

It’s hard to say why Strang did what he did. He claimed to have found his own buried plates and translated them with the help of God. The result was his plan for a theocracy entitled The Book of the Law of the Lord. Even after his followers were evicted from their island home, some gathered and maintained the torch for their fallen guide. There’s still one “Strangite” church in Michigan today.