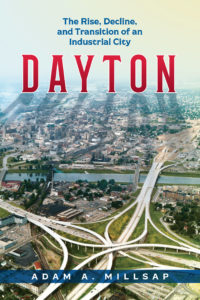 I don’t talk a lot about my hometown of Dayton, Ohio. It’s an older rustbelt city in Southern Ohio where I spent my formative years. I lived in one of its suburbs, Beavercreek. True fact: the last Beaver was trapped out over a hundred years ago. Twice I’ve had to move back to the “Gem City for economic reasons. I left each time.

There’re few books on the history of Dayton. Named for a Revolutionary War general, the city started as a small settlement on the banks of the Miami River and grew to be an industrial powerhouse by the turn of the nineteenth century. The Wright Brothers had a bicycle shop there, although it was transported to an outdoor museum in Michigan. A man named Patterson created National Cash Register (NCR) which was a major employer in Dayton for years. At one time it was the “Silicon Valley” of the Midwest. The air force had a base near Dayton where Project (UFO) Blue ook operated.

The book is quite good. Millsap sums up the founding of Dayton in one paragraph:

Dayton is located along the Great Miami River in the Miami Valley region of Ohio, about 54 miles north of Cincinnati and the Ohio River by car and a little over 30 miles east of the Indiana border. Many large cities formed on the banks of rivers for several reasons, including access to drinking water and water power. It was also generally cheaper to move people and goods by water than over land. Cars, paved highways, and airplanes have since reduced the cost advantages of water travel, but the large amount of international shipping that still takes place on the oceans attests to the cost effectiveness of water transportation.

There’s a very section on the rise (and fall) of NCR:

H. Eckert had sold the cash register to the National Manufacturing Company, and when Patterson returned, he made a deal with the company’s president, George Phillips, to buy his controlling interest for $6,500. Upon hearing of the deal, Patterson was ridiculed by his peers, who all thought the cash register was useless. This made Patterson have second thoughts, but Phillips refused to let him back out of the deal. Forced to forge ahead, he changed the company’s name to National Cash Register and began improving the register and hiring and training sales agents. By the early 1890s, NCR was selling over 15,000registers per year. NCR grew to over 6,000employees under Patterson’s leadership, and its headquarters and factories occupied over 100 acres near the east bank of the Great Miami River on Dayton’s southern border. By the time Patterson died in 1922, NCR had sold approximately two million cash registers.

And then the wolf arrives:

The lack of innovative firms and universities in the Dayton area in the latter half of the twentieth century contributed to Dayton’s waning economy. Throughout the twentieth century Dayton relied on the inventions and achievements of its past: NCR, Frigidaire, Delco, Mead Corporation, McCall’s, Huffy Corporation, and L. M. Berry were all well-known national companies and significant employers in the Dayton region through the latter half of the century, and each was started prior to 1940. After the entrepreneurs and innovators of the early 1900s passed away—Charles Kettering, John Patterson, and others—new innovators failed to take their place. As a result, Dayton became dependent on a handful of historically large employers to provide an economic base for the city.

It’s a good overview of the economic past and probable future of Dayton.