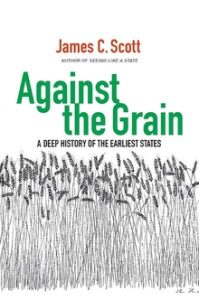 Against the Grain: A Deep History of the Earliest States (2017)

The author attempts to answer this question: why in the world would anyone leave the idyllic existence of hunter – gather to bust sod on some plain for an ancient overlord? The food isn’t that good, the work dull, and ancient states were infested with disease. Too many people and animals shoved together in proximity.

Scott theorizes that it came about by climatic changes thousands of years ago. This forced people into close quarters. It created obedience to local princes who had plenty of food. They also had land to farm. Once the peasant class was established, it was no problem to keep them on the plantation. One thing that civilized people did better than nomads was to breed. Soon, all those Western Hunter Gathers loved in the anthropologist textbooks were encroached upon by Early European Farmers.

He blames grain for much of it. Wheat grain is easy to store and tax. Potatoes are not a good medium of exchange as they need to be dug-up and spoil if not cared for by diligent field workers. Likewise, apples and any other kind of fruit.

So, what’s keeping us from going back to Conan and King Kull?

As sedentary communities, the earliest states were vulnerable to more mobile nonstate peoples. If one thinks of hunters and foragers as specialists at locating and exploiting food sources, the static aggregations of people, grain, livestock, textiles, and metal goods of sedentary communities represented relatively easy pickings. Why should one go to the trouble of growing a crop when, like the state (!), one can simply confiscate it from the granary. As the Berber saying so eloquently attests, “Raiding is our agriculture.” The growth of sedentary agricultural settlements that were everywhere the foundation of early states can be seen as a new and very lucrative foraging site for nonstate peoples—one-stop shopping, as it were. As Native Americans realized, the tame European cow was easier to “hunt” than the white-tailed deer. The consequences for the early state were considerable. Either it invested heavily in defenses against raiding and/or it paid tribute—protection money—to potential raiders in return for not plundering. In either case the fiscal burden on the early state, and hence its fragility, increased appreciably.

Once the “state” organized itself, it could fight back against the raiders who took advantage of those peasants in their grass huts on the canal. It could also go out and bring nomadic wanders into the fold of empire. There’s a reason the ancient Chinese called nomadic tribes under control of the emperor “cooked” and those outside of his celestial realm “raw”.

Even so, grain taxation is not foolproof. Though a given cereal crop, once planted, ripens simultaneously, the seasonality often allows for varying planting dates, so different fields may mature at slightly different times. It is also not uncommon for a tax-avoiding cultivator to harvest surreptitiously some of the grains before they are fully ripe in order to escape the tax. Archaic states endeavored, whenever possible, to mandate a planting time for a given district. In the case of irrigated wet rice, all adjoining fields are flooded at roughly the same time, and this alone dictates the (trans)planting schedule, not to mention the fact that rice is the only crop that will grow under these conditions.

This is an intriguing book which counters the standard narrative as to how the ancients went from cave-dwellers to builders of cities. It’s not perfect. The author tends to virtue signal at times, but he raises many questions about how we got into the present civilized jam.