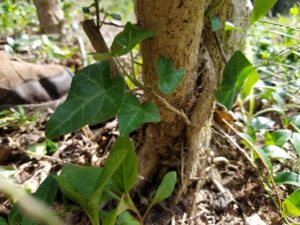 Vines in my hedge maze are a constant problem. You’ll find them in the spring trying to wrap around the base of the shrub. All summer it’s a constant battle to keep them out of the hedge line. It’s one that never ends. Most of the real problem vines sneak underground and emerge when they find something that sticks up toward the sky. Some of the vines have bark, some are leafy, but all grow fast.

Just this week I walked out into the hedge maze to find an unknown species growing up to the top of one of the shrubs toward the center of the maze. Merely two weeks ago I’d finished a scorched earth campaign. I went on both sides of the hedge line and dug out every vine I could locate. As you can see, I didn’t get them all. Eventually, I’ll have to set up a defensive perimeter at the property line and stop them as they cross the barrier. I won’t use poison or any chemical because I don’t want that crap in my hedge maze.

One of the most annoying of vines is the English Ivy. This little fiend grows at the soil line until it contacts a tree, wall or shrub. It will wrap itself around the trunk or footer. Then it will work its way to the top in a few weeks, if allowed to grow unchecked. I found a thick coil of one that wrapped around a trunk a year ago. The actual trunk continued to grow until it began to swallow up the vine. When I managed to uncoil the vine, it left indentations int the bark of the shrub where the vine refused to let go.

Also known as common ivy or European Ivy, English ivy is an evergreen vine. Which means you’ll see it after the privet shrubs lose their leaves in the fall. It’s cultivated as an ornamental plant and used as ground cover. Many species of animals eat the berries produced and scatter the seeds over the landscape. This is another reason it’s found all over the temperate zones. Although English ivy can cause contact dermatitis in some people, extracts of this ivy are used in some cough medicines. It grows bark on the stands soon enough, which is another problem in getting rid of the plant. The best tool to use against it is the common limb cutter.

Another vine pest is the Japanese honeysuckle. Like English Ivy, it sneaks into the hedge line from the ground when you’re not looking. It has a sweet-smelling flower which animals, and some humans, find to have a pleasant taste. It’s also an invasive species, as anyone who’s had to chop it back can tell you. Fast-growing, this vine can shoot up and over a hedge line before you even notice it’s there. It seems to have freeze-resistant properties, as I find the vines well into December, well after the first frost has begun.

Honeysuckle vines aren’t that hard to pull down or tear, but you need to locate the ground point from where they emerge. If the vine isn’t yanked out in a hurry, it will return. Honeydew grows underground until it reaches something to climb upon, like many vines, but it creates root balls as a propagation point. The root balls need to be dug out of the ground to stop the vine from spreading. The root ball is a disgusting thing to look at, as it resembles an alien creature made from black worms.

The absolute fiend of vines that I find in my hedge maze is poison ivy. The vine is also known as eastern poison ivy or Toxicodendron radicans. It is not to be confused with poison oak, or poison sumac. This plant is found all over eastern Pennsylvania and grows in abundance. At least I don’t get an outbreak or rash from casual contact. However, many people are highly sensitive to this plant. The oil produced by it causes all manner of blisters and rashes in people, sometimes forcing hospitalization. I’ve had enough contact with it as a kid not to break out right away, so I’ve built up a certain resistance. I remember hating those blisters as a kid and the calamine lotion my mother drenched me with to get them to go away. There are other treatments, including one made from the jewelweed.

Poison ivy is identified by its characteristic triple green leaves. As you may have heard, “Leaves of three, let it be.” The vine itself is full of hairy rootlets that grip on anything it can find. It’s a sneaky plant and grows a few inches under the soil until it finds a bush. Poison ivy doesn’t often wrap itself around a trunk or branch but manages to climb through the shrub just the same. I’ve found them spread through a shrub. It’s easy enough to remove, just use gloves and, for God’s sake, don’t get the juice on your skin.

Dispose of poison ivy vines in garbage bags. Please don’t burn them as It’s possible to inhale the particle from the smoke. They can be composted, but, due to their resiliency, they tend to find a new way to propagate.

The battle against invasive vines never ends. The best any potential maze grower can do is be on the watch for them. Remember, no vine grows alone. It’s important to find the propagation points and track them back to the source.

There are plenty of other vines that will take advantage of the hedge maze and try to grow into the hedge line. The best you can do it try to find out which are the worst ones in your area and be on the look-out for them. Your temperature zone and soil conditions will make the difference. I could go into the many other varieties of vines found in Easter Pennsylvania, but I’ve decided to focus this article on the ones which cause the most problems for me. As I noted, some of these vines are intentionally grown as decorative ground cover. First published in 10/19