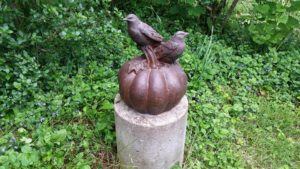 Soon after I planted my hedge maze, I knew it had to be decorated in some fashion. As the hedge maze was inspired by the M R James short story, “Mr. Humphreys and his Inheritance” (more about that in the future), I needed to make it appear a proper English country garden. I couldn’t afford to pay someone to be a hermit and contemplate a skull in a hut all day long, so I did the next best thing.

I began to put statuary inside the hedge maze.

My original idea was to have a different bit of statuary inside the maze at every oubliette. People could wander around it after the maze was grown and find interesting things to contemplate. Mr. Humpherys found his maze to be filled with bizarre figurines from the Old Testament of the Bible. I didn’t have the money to invest in a sculptor to create interesting pieces, so I had to do with what I could find.

By the way, this was the reason for the giant mushroom figure that I placed at the center of the maze around year two or three. I knew about the mushroom and hauled it back to my hedge maze after the event concluded for which it was designed. As I’ve said before, it turned out to be more difficult than I thought to keep it out there, as most stage props aren’t designed with long-term weather in mind. That said, there’s a Baal in New Jersey leftover from some Hollywood production and countless artifacts in other collections. None of which are in my hedge maze (grumble, grumble).

The first statue I found was the “demon child”, as my kids liked to call her. DC, my term, can be seen in the screengrab I posted for the video shot in my hedge maze at the top of the previous post. I bought her at some garage sale and posted DC in the upper oubliette. She had a small bubble-blowing toy in her hand in the beginning, but time and erosion withered it away. I replaced her with a statue of Artemis last year. This one which I bring in before the snows hit as it’s made from cast polyurethane and not likely to hold up in the cold weather. She’s accompanied by a seated Tarzan action figure I dug up from the ground. The kids used to launch toys over the hill and I’m sure I’ll find more in the future.

A few more figurines would join the collection, including several plaster ones I rescued from garage sales and dumps. These I painted and placed on stands, or on the ground, throughout the maze. Note to self: plaster-cast figures don’t hold up very well. None of these survived more than a few months. Also, in the mix was a ceramic tiger that endured a few years of the wind and rain before crumbling. I’ll try to post the encounter between Cleo, my son’s pit bull mix, and the statue if I can remember. It’s quite funny.

One of my original plans was to cast concrete pillars at specific points in the maze and lower limestone benches onto them. During some work on the lower hill, several years before the maze construction, I discovered the foundation of a small building near the alley road. I expect there was a springhouse down at the bottom of the hill at one time, given the lay of the land. The foundation consisted of several large, flat stones, probably used as the foundation sill of a door frame. Each one had to weigh in excess of 600 pounds, so I was reluctant to move them.

I gave up on the idea of placing the stone slab on two cast concrete pillars. I found it was impossible to do this with my equipment. I had no way to hoist them into the air and onto said concrete pillars. I opted for some large boulders as the support, as they were lower to the ground. However, this left me with several pillars that I needed to use.

One pillar became the resting place for my moon dial, which I shall discuss later. Another one was where I placed a sundial, which I’ll need to replace since the gnomon snapped off a few years ago. No gnomon means a sundial that’s useless since you can’t wind it up.

Another pillar supports a cast concrete crows and pumpkin figure I discovered at a garden supply place a few years ago. It sits nicely at the end of an oubliette. I should take it in before the snows come, but, darn that thing is heavy and low to the ground.

Also, I need to mention the Hekate plaque I have in the center of the maze. Hekate, being the guardian of crossroads and mazes, seemed appropriate. I thought the plaque was a reproduction of a Roman or Greek original, but now I think it’s a modern interpretation.

I even had a cast concrete skull on a pedestal for several years. At one point I placed a set of sunglasses on it. However, the concrete eroded away. Even when primed and coated with epoxy, the skull didn’t last. Nor did the pedestal, since it was cast from plaster.

This is a sample of the statuary I’ve placed in my hedge maze since its construction. I’ll try to talk more about this subject in future posts.