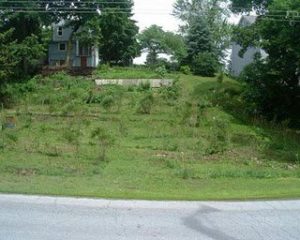 You may wonder how I grew a hedge maze in my backyard without running afoul of the plant police. It was easy. I checked and discovered there were no ordinances against growing a hedge maze in my little Eastern Pennsylvanian borough. You can’t have livestock or discharge a gun in the borough limits, but you can have a hedge maze. At least you could years ago when I planted the thing, this may’ve changed since then. Anyway, the hill drops rapidly to the level of the alley, which makes me think there was a creek in place of the alley generations ago. There’s even a French drainage system down there. Lower hill floods if the rain is hard because someone who shall remain unnamed dumped a load of vines and weeds over the French drain and hasn’t removed it. Do I sound perturbed about that one? To resume, I had a piece of land that was of minimal use to me or anyone else. The borough made it clear, at the time, that land could not be subdivided. My land, for instance, consists of three parcels: the house, the lot between my house and the one to the east, and the backlot. I did the research years ago and discovered that one of the previous owners bought the back lot, current home of my hedge maze, to add to his land. Don’t know why. I don’t even know who he bought the property from, but I suspect the borough. There was a building of some type down there, I know from the excavations My young Howard Carter did on the lot and from some drawings I’ve found in the library. I suspect it was a spring house, but not sure. If it was constructed in the 1920s or afterward, a spring house would’ve been unnecessary, as iceboxes and factories were all over this area. Back to the reason for the hedge maze. I’ve always had a fascination for mazes and wanted to plant a hedge maze for a long time. Here is a piece of land I’m forced to mow in the warm months. There is a row of privet hedges around the front of the house. Opportunity! I wish I could pinpoint the exact day that I decided to plant the maze. I know it was winter as I spent a cold Sunday researching maze patterns on the Internet. There had to be one I could use. Most were absurd. Profession hedge maze horticulturists use open boxes of wooden fencing to plan out and direct the maze pattern. This works well as the sunlight can penetrate to the hedging plants. When they grow out of the fencing box, all the horticulturist has to do is snip off the extraneous growth. After the hedging plant is thick enough in the box, the fences are removed and now you have a smooth and squared-off hedgerow. I knew this would never work for my maze. First, where would I get the fencing material to make the box? To order enough fencing material would be too expensive and create a major problem of storage and removal. I knew this couldn’t be done at the base of my hill. I decided on the only way to do it was by planting the privet bushes one at a time. Then all I would have to do is wait for them to grow up and out. Once large enough, It would be a simple matter for clippers. Seemed good when I worked it out in my head. My problem was in planting all the privet bushes without cutting them down to a 3-foot height. As you can see in the photograph, this created a tall, wispy maze. And you could see right through the thing. I surveyed the maze from the top of my hill and realized it would need some time to grow out. It was later that I learned that the best way to get the privet to grow was to trim it. I tried several statue placements that year, but nothing seemed to look right. Everything I place in the maze was an absolute mess. The only thing I managed to stick in it was a large purple mushroom prop left over from a stage play in Philadelphia. I knew about the giant mushroom, found the back alley where the prop was disposed and hauled it back with me in the van that I owned. It was a simple matter that night to roll it out of the van and placed the giant wooden mushroom in the maze. Got a few strange looks from the neighbors over that one. Heh. However, I soon learned that a stage prop isn’t designed to be used outside. One rainfall and the crepe paper on it began to buckle. I’d planned to seal the paper with epoxy but never had the chance. I ended up bringing a few buckets of leftover silicone sealant to the maze and using it to paint the mushroom. It took a while, but the mushroom survived two years in the Eastern Pennsylvania weather with the silicone coating. Eventually, the ants found a way through the membrane and went to town on the wood structure. And the mushroom was no more. Published 9/19/19