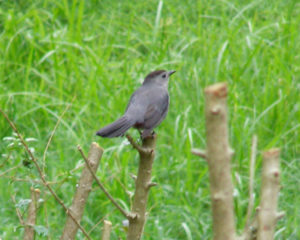 Early on, during the Big Trim of my hedge maze, I discovered there were many birds who used it for nests and a place to hide. I’d suspected it was a refuge for the birds in my neighborhood for many years. However, until I began the herculean task of trimming the privet shrubs and digging up the vines, I had no clear idea of how popular it was the winged members of the animal kingdom.

One afternoon, as I sat on the old truck bed cabinet (which I use to store tools), I noted an entire family of cardinals at the end of one of the oubliettes. There were about four fledging chicks on the ground with both the mom and dad cardinals taking care of them. I watched the momma cardinal feed two of the babies, as they hadn’t learned how to forage on their own. This, it suddenly hit me, was the reason for the abandoned bird nests I encountered as I trimmed shrubs down to size.

The most frequent winged visitor I find in the maze is the northern cardinal. This bird, also the state bird of my home state of Ohio, is found all over the United States. It is known for the bright red color in the male and brown color of the females. They nest in bushes and trees, which makes the hedge maze attractive to them. The primary diet of the cardinal is seeds and small insects, another reason they can be found between the hedge lines.

I should point out that weeding large areas attracts birds. Since weeding out vines causes a lot of ground to be turned or exposed, it also unearths the bugs that live beneath the sod or whatever is turned up during the weeding. I’ve sat and watched hordes of ants, sowbugs, whatever run for cover after I’ve dug up their habitats to get rid of poison ivy vines. It’s not hard to figure out why they’re running in terror, as the moment I leave the birds arrive in force. I can stand at a distance and watch as the birds descend on the uncovered feast.

The cardinals lay their eggs in nests they make inside the shrub line. In a few days, the eggs hatch. In about two weeks the cardinal chicks are ready to leave the nest. I photographed a nest of cardinals from egg to fledging chick, which I will later put up on this site. Cardinals are very defensive about their nests and will screech at anyone who comes to close. I was surprised to see them continue to care for the chicks on the ground, but this is normal for the species.

The other bird I discovered that frequents the hedge maze is the gray catbird. This is a small bluish-gray bird that makes a sound like a house cat, hence the name. They tend to be more skittish than the cardinal and aren’t as defensive about their nests. I found several nests that I think belonged to catbirds, but they abandoned them. Which bothered me as I took great precautions to ensure their nest was undisturbed during the Big Trim.

Another frequent visitor to my hedge maze was blue jays. These are very aggressive birds who will fight-off anyone who gets too close to their nests. Blue jays have the bright blue color that identifies them and a loud screech to warn away anyone who comes too close.

I could on for a bit about all the bird species I’ve seen in my hedge maze, but I don’t think anyone wants to read about them. I’ve seen vultures as well, although they don’t stay around long.