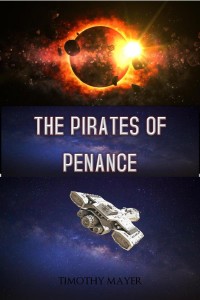 The Widowmaker folded space and emerged four light years from where they had departed. The Schrodinger Generator in the ship was in good working order. It had to be since any malfunction could send them to the other side of the galaxy or into the middle of some place never charted. There were stories of Schrodinger Generators that malfunctioned and sent the crew to some place unknown on any star chart. In such cases, there was no way to navigate a return trip. A few tales were told of ships that ended up in the wrong place in a different galaxy and made their way home on sheer luck and ingenuity. Shakti thought such stories were made up to scare children.

This was a test run of the corvette with its new crew. They’d trained long and hard to learn how to operate the corvette and learn its weapon systems. The Widowmaker had four rotating laser systems for most fights, but it carried twelve nuclear weapons with their own propulsion systems. Most space battles took place with the lasers used first and boarding an enemy ship as the final assault. The nuclear weapons were the choice of desperation since they had a nasty tendency to detonate too close to the ship that launched them. Whatever the evolution of the wasps, the empire found their adversaries did much the same thing when it came to weapons. It was always a matter of scale and precision. Death rays were the stuff of fairy tales.

Since it was a test run, the Widowmaker was not sent too far into the frontier. The plan was for them to travel to a known point in a part of space used by the navy for maneuvers, then return. Shakti stood at the control deck and watched the generator in operation as Chimata activated the system. They were all in the command center since the entire contingent of war brides were needed to operate the corvette. It happened very quickly. They felt a sense of disorientation and the ship was at the rendezvous point.

“Are we where the drive was supposed to take us?” Shakti called out to Tara who was in charge of the coordinates. She was floating over a chart of numbers when the corvette emerged in its new location.

“Looks like were a bit off,” she called out. “About two million miles. We need to fix a few things before we do this again.”

“How close can you get us back to our departure point?” Shakti asked her. “It does us no good to fold back and end up too far away from the Vindicator to be of any use.”

“I think we can safely get to two hundred thousand miles from where we the last time,” Tara called out to her. “That’s enough to make contact with the Vindicator and reach it in two days running on full ion power. We can go a little bit faster if we use the atomics.”

“Shakti,” Kamala called out from her station, “we have another ship in our vicinity. It’s about fifty thousand miles away and moving in the direction of a rally point. I don’t like the look of it.”

Shakti grabbed one of the handholds and pulled herself over the screen. Kamala stared at it for a while. On the screen, she could see a rendition of a small ship outfitted with short-range lasers. It was meant for offensive uses, but at least it had a human look to it. This couldn’t be a wasp ship.

“So what do you think it is?” Durga asked her as she floated next to them both. “Doesn’t look like any kind of commercial ship. Is it sending out any call sign?”

“I don’t see one,” Salina commented. She knew more languages than any other Warbride, so Shakti put her in charge of communications. “At least they don’t appear to try and make contact. Maybe they don’t know we’re here. It would explain the reason the ship is avoiding us.”

“They know we’re here,” Shakti said back to her. “They would have to know. We’re not that far from them and the generator would have created a huge hole in space for them to see. The radiation burst would let them know right away someone else is in the neighborhood.”

“Do you want me to see if I can make contact with them?” Salina called to Shakti. She turned her purple eyes in Shakti’s direction and tried to control her zero gravity float while reading the spectrum near the ship. For a young woman of eighteen, she learned the communication systems of the corvette faster than anyone expected.

“Don’t,” Shakti called back. “I don’t know who they are. It’s not a good idea to make contact until we know what we’re dealing with. See if you can send a beam to the Vindicator and tell them we’ve spotted a ship where there isn’t supposed to be one.”

Salina nodded and returned to her screen. She punched out a code for a wave beam. It would fold itself back across space and end up near the other corvette.

“Are we operational on the forward cannons?” Shakti asked Lashmi. She had the fastest response time of any of the warbrides and it made sense to put her in charge of the lasers. The use of the nuclear weapons was reserved for the captain of the ship, which in this case was Shakti.

“I’m powering them up,” Lashmi responded. “It shouldn’t take long, but they’re too far away to be any kind of immediate threat.”

“Just keep them ready,” Shakti told her. They’d only test fired the lasers a few times and she didn’t feel confident in using them.

The corvette moved slowly into positon and began to track the other craft. They couldn’t get a decent visual on it as it was moving in a different pattern than they anticipated. The new ship used a small planetoid to avoid detection and moved behind it, but the corvette turned in space and followed its path. They used the planetoid to block most of the radiation from the nearby star and try to pursue the new ship.

“Did you get any kind of identification on it?” Shakti asked Durga, who was in the process of going through the files to see if it matched any known spacecraft entered into the logs of the empire. So far, she couldn’t find a thing. It appeared the new object was built from many existing ships. It used bits and pieces from someone had merged together from scrap yards all over the galaxy. The amount of detail worked into it was quite impressive and the engines were giving the ship exceptional maneuverability as they tracked it across the event horizon.

“I’m not finding a thing,” Durga told her. “Nothing at all is coming up. This thing isn’t even listed on the role of commercial ships. I think it’s build from multiple wrecks somebody found.”

“Who would build a space craft out of junk and arm it with lasers?” Shakti said to her second as she swung down to Durga. “It doesn’t make sensed unless we’ve encountered…”

She stopped talking long enough to look at the other woman. They had the same idea. Both stared at each other in silent recognition and didn’t say a word.

“We’ve got a wave beam coming in,” Salina yelled from her station. “Looks important. You want me to put it in the middle?”

“Go ahead,” Shakti confirmed. “It sounds like something we all need to hear.” Salina made a few adjustments on her screen.

The head of a prefect formed in the middle of the command center. It was in response to the request Shakti had sent earlier about the new ship. The head began to speak slowly.

“This is the imperial war college in response to the corvette Widowmaker request for information on an unidentified ship near the point where they folded space. Your message was forwarded to us from the Vindicator. We have a positive identification on the new ship. It is a pirate craft operating near the Sonus Cluster. You are ordered to engage and neutralize it. The pirates are causing too much trouble and have forced us to devote valuable resources against them. We need those forces to fight the wasps. You are authorized to use whatever you have to neutralize the ship.”

“I think that means take them out,” Kamala shouted from her station.

“How do the lasers appear?” Shakti asked her cannon operator.

“We have full power,” Lashmi told her. “They’re still too far away to use them. You’ll have to bring that pirate ship closer in range before we can take care of them.

“Are you going to give them the option to surrender?” It was Bravi. Shakti could see her nostrils flare in excitement.

“Of course,” she told them. “I think it’s standard procedure. We have a torpedo we can use?”

“Twelve,” Lashmi yelled as her hands flew across the screen. “You want me to fire a warning shot?”

“Use one of the smaller warheads,” she informed her. “I want them to know we’re in pursuit and give it a chance to yield. We may have to board this one, keep it in mind.”

“I was hoping you would say that,” Kamala commented from her post. Shakti watched the other warbrides grin in anticipation.

Lashmi found the torpedo she wanted to use. It was loaded and ready in the front chambers attached to the habitat part of the Widowmaker, but it did not spin like the rest of the living area. It needed to be stationary to send its deadly cargo forward. The torpedo hold was a small part of the ship and was anchored to the front shields. Since the torpedo was independently operated, it could be deployed from any direction. Once fired, it would find its way to the target. She punched in the coordinates so that the torpedo would detonate a good distance in front of the pirate ship and let them know the firepower her corvette carried.

She made a final entry and pushed a button. “Torpedo away!” Lashmi yelled, as they watched the bright light of the propulsion unit flare in the distance from the corvette. Seconds later, it found its final course and began to move in the direction of the pirate ship. There was silence as the image of the torpedo appeared in relation to its target on the holographic display in the middle of the command center.

The Pirates of Penance on Kindle