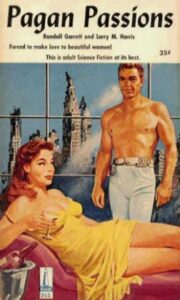 Randall Garrett was a post-WWII science fiction writer who created a number of fictional words for which he is little remembered. He was also one of the earliest members of the Society for Creative Anachronisms, a recreational medievalist organization. He passed away in the late 1980’s and will, sadly, be remembered less as the years go by. Fortunately some of his books are finding their way back into print.
Pagan Passions is a light and amusing fantasy novel about what would happen if the ancient Greek and Roman gods returned to earth. The novel begins by informing us how the gods of Mt. Olympus have returned after several thousand years of absence. Major wars are now abolished (Mars having some understanding of the occasional need for minor ones). Most of the action takes place in a future New York City where everyone is a devotee of one of the major gods.
The book opens with a teacher of world history, William Forrester, lecturing to his students about the return. Forrester is an acolyte of Athena, but he’d hoped one day to make priest. The action switches to a female student (of the faction tied in with Venus, naturally) making suggestive remarks to him for a better grade.
As he contemplates his situation, Forrester is called into the tower of the all-father Zeus. The gods need a replacement for Dionysus, who is currently indisposed. They’ve decided to elevate Forrester to demigod status.
The rest of the book describes Forester’s attempts to officiate at an revel held in New York City in honor of Dionysus. These revels take place every seven years and all his followers party down hard. Forrester finds himself forced to deal with seven gorgeous women who are presented to him while he secretly pines for a lost love.
The book ends amusingly. I’ve not read any other of Garrett’s books, but it seems this is a minor work.