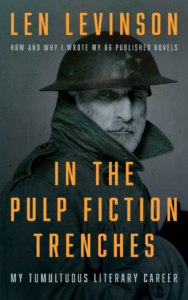 IN THE PULP FICTION TRENCHES:

There’s a Far Side cartoon by Gary Larson that I can’t seem to find. It shows the devil on a TV screen facing a sweltering room of damned souls in hell. He’s taken the part of a weatherman and informs the damned souls that the big cold front is going to “barely” miss them. The cartoon sums up this book of essays by pulp writer and paperback virtuoso, Len Levinson.

Levison started out writing for a Prentice-Hall Publishers in New York City. This was back in the 1960’s. It was a grueling experience and served as the foundation for his novel The Cobra Woman. Before this experience, he attended college on the GI bill, after serving in the army during the fifties. Raised by an angry WWI veteran father, he came of age in a public housing development. Somewhere along the way Levinson decided to become a writer.

The first few years he worked for a big publicity company in New York City. He describes it as grueling but it did all Levinson to meet many famous people.

After watching two colleges drop dead from overwork , Levinson made the decision to quit his stressful job and become a full-time novelist. At this point the narrative is supposed to show him struggle onward until finding success and fortune as a big-time novelist in the Harold Robbins mode. Were this a Hollywood movie, the writer would go on to fame and buy a big house in the hills overlooking Los Angeles.

As Levinson tells it:

On the other hand, if I played it safe and remained in PR, suppressing frustration and dissatisfaction, I’d probably evolve into a well-pensioned, gray-bearded, ex-PR semi-alcoholic residing comfortably in a West Side co-op, or gated community in Boca Raton, happily married to a former Playboy Bunny.

But the day inevitably would arrive when I’d be flat on my back in a hospital bed, tubes up my nose and jabbing into my arms, on the cusp of Death Itself.  And knowing how my mind tends to function, I’d reproach myself viciously for not at least attempting to live my dream, since I was going to die regardless.  Why not go for the gold ring of the novelist’s life instead of getting put down daily by journalists?

But things turn out different.

The reader is treated to an endless series of near misses and almost hits as Levinson cranks out one paperback action book after another. Each time his publisher and agents are certain the latest one with be THE NEXT BIG THING! But it is not to be. His series are canceled due to poor sales or changes in tastes.For the most part, Levinson doesn’t even get the joy of seeing his name in the bookstores. Most of his writing jobs are done as a ghost writer. As many people know by now, the real authors on those bus station action paperbacks are house names, so that the publisher can hire many different writers (and pay them as little as possible).

All total, he would write eighty-six novels over his writing career, most cranked out on a typewriter. Most were for small companies, such as Belmont, that needed books written fast to take advantage of the latest trend.

I’ve read and reviewed several of his novels over the years. I’ve also conversed with Mr. Levinson a few times over social media. He is sharp, witty, and gracious that people still remember his words.

Most of his career consisted of walking to the NYC publishers, for whom he wrote, and finding out what they needed. Spy series? He was ready to start as soon as possible. Racy literary novels are the rage? Levinson had his ready in due time. Did the publisher need a western to fill out a due date? He was on it too, although he’d never been on a horse. In the Dark Days Before the Internet, the public libraries were wonderful resources. Levinson even writes about visiting a naval museum so he can visit an actual WWII submarine. Now that’s dedication!

It all starts to wind down with the gradual wane of the paperback boom. Many are the reasons for decline. Most point to the 1979 Thor Power Tool Company ruling in which the courts ruled unsold inventory could no longer be counted for full value to be used as a tax write-off. His jobs become less and less, but the bills still need to be paid. All the time he’s forced to suffer in a crappy Hell’s Kitchen NYC apartment. At one point he becomes so depressed, Levinson checks himself into a psychiatric unit.

It ends on a somewhat happy note. After surviving a bout with cancer, he moves to the Midwest where his daughters can take care of him. He even gets his copyrights back when several of his publishers go bankrupt. Today, many of his 70’s action books can be ordered as eBooks online. Levinson is in his eighties and still writes essays on social media.

So, what can we learn from this book, little children? First, if you plan on making it as a professional novelist, have enough cash on hand to get you through several years of little to no income. Second, don’t be too quick to sign-up for ghost writing jobs. As someone who’s written and published over thirty-five novels, there is no guarantee that those “ghost” jobs will lead to better opportunities. And third, know that there was no golden age of paperback writing where everyone with a typewriter and skills could count on a steady income.

In The Pulp Trenches is a fascinating look into the life of a paperback writer in the 70’s. I couldn’t put the book down and had to read it straight through. If you’ve ever wondered what it was like to write action novels in the 70’s, this book should be on your shelf. And the next time someone tells you how much better novelists had it in years past, point this book out to them.