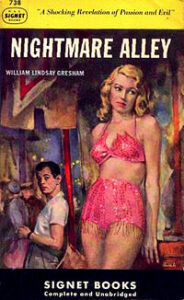 This is the story of Stanton Carlisle, a carnival
sideshow mentalist, who decides to strike out for the big time by
going into the spiritualism racket. With his knowledge of human
nature from years of working sideshows, he is able to fleece enough
people to start his own church. But it all comes crashing down
around him when he tries to scam a wealthy industrialist. The book
ends with the protagonist’s descent into alcoholism.
First published in 1946, this is a grim book. Its moral could best be summed up
as: “There’s always somebody who can hit harder than you can.”
The novel contains one of the most fiendish examples of the femme fatale
I have ever encountered in literature. Carlisle meets his match in the person of Dr. Lilith
Ritter, a psychiatrist who has risen to the top of her game by
holding the secrets of many rich and powerful people in the
Manhattan. When he first goes to her office for an appointment, she
puts him in a marital arts hold and proceeds to tell him that she
knows what his game is and how he runs it. A few chapters later
Carlisle has already turned into her sex slave and is being used to
set-up the wealthy industrial magnate.
What makes the character of Dr. Ritter so memorable is the way the author
describes her background in a few short paragraphs. The daughter of a saloon
keeper, Dr. Ritter turned the abuse she suffered while growing up
into an asset against the kind of people who took advantage of her.
Carlisle, on the other hand, never recovered from his mother leaving
him as a child and that tragedy sets him up for his eventual fall.
NIGHTMARE ALLEY is a depressing read, but a good book to get a look
at the kind of con games that were run against unsuspecting people
during the Depression.